A Veiled Woman and a Single Man

Home » A Veiled Woman and a Single Man 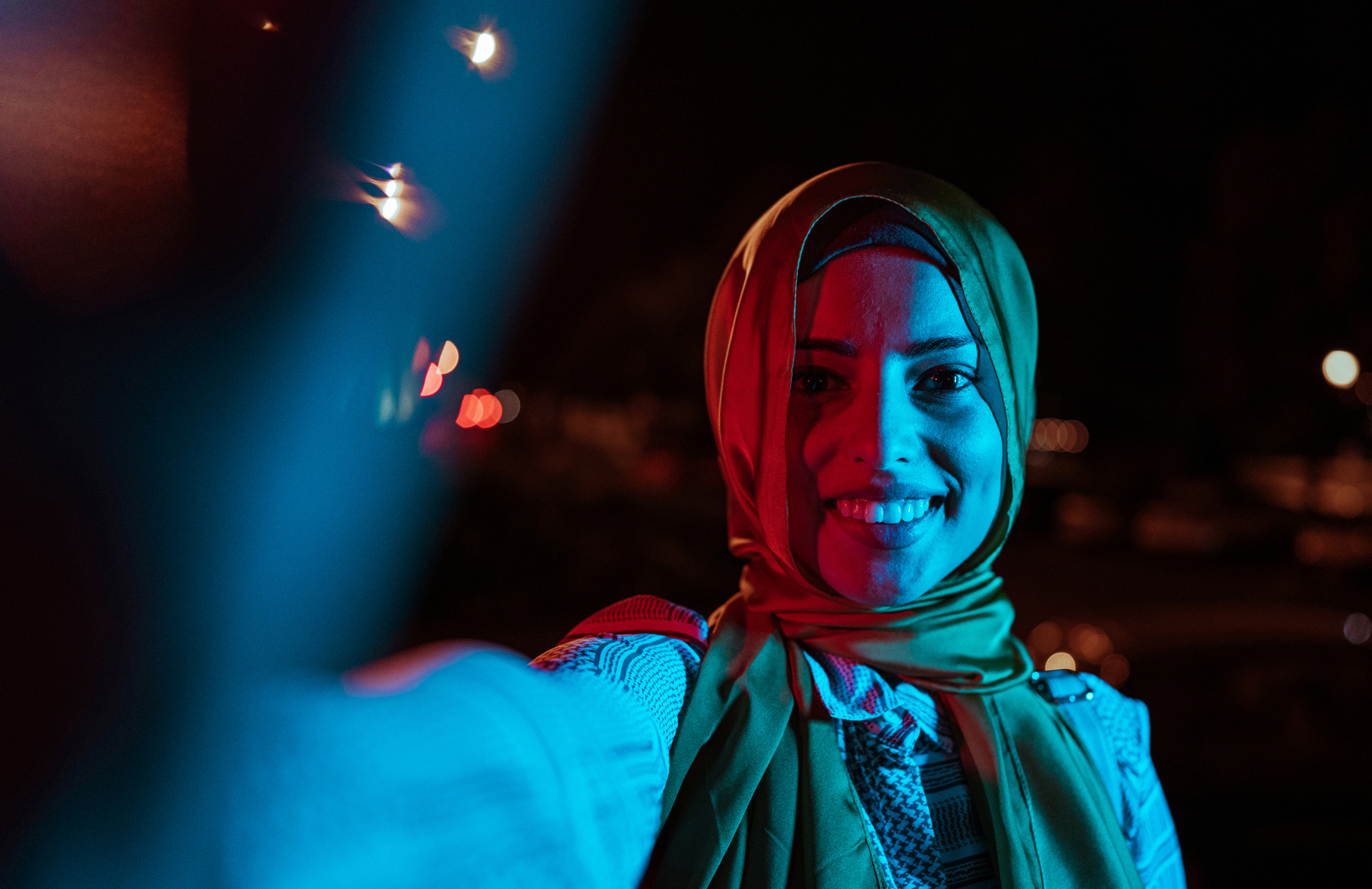 So why would Kamal brave this Friday free-for-all? Only the most urgent of necessities ever compelled him to attend, and even then, he avoided the central market area by using one of the less-thriving entryways. But this particular Friday, he went because God told him to go. He knew with 100 percent certainty God had an assignment waiting for him there. The details of the mission were a mystery to him, but he was used to trusting God in the face of the unknown.

So when the market opened at 8 a.m., Kamal was there, yielding to what he knew was God’s prompting and found himself crushed and battered by the crowd while he waited for he wasn’t sure what.
Noor, a committed Muslim mother of eight, spotted him in the Khan, and soon the purpose behind Kamal’s strange errand became unmistakable.

The woman in black began unfolding to Kamal details of the vivid dream she’d had the night before this meeting. “Jesus walked with me alongside a lake, and He told me how much He loves me. I think my husband loved me at one time. But that love I felt in my dream—His love—was different than anything I’ve ever experienced. I’ve never felt so much peace in my heart. I didn’t want to leave. I didn’t want Him to leave. I asked this Jesus, ‘Why are You visiting me, a poor Muslim mother with eight children?’ And all He said was, ‘I love you, Noor. I have given everything for you. I died for you.’”

The din of the market faded from Kamal’s consciousness. He heard only Noor describing her otherworldly encounter with Jesus Christ.

“As He turned to leave, the last thing Jesus said was, ‘Ask My friend tomorrow about Me. He will tell you all you need in order to understand why I’ve visited you.’ ‘But, Jesus, who is Your friend?’ I pleaded in my dream. ‘Here is My friend.’ Jesus pointed behind us. ‘He has been walking with us the whole time we’ve been together.’”

Only partially veiled, Noor stared at Kamal as if she’d been looking for him her whole life. She continued, “Before He said that, I had not noticed you. But you were there—standing nearby through the whole dream. Even though you had walked with us around the lake, I hadn’t seen anyone but Jesus. I thought I was alone with Him. His face was magnificent. I couldn’t take my eyes off Him.

“Jesus did not tell me your name, but you were wearing the same clothes you have on right now, and your glasses…they’re the same too. In my dream, your face radiated in a way that told me Jesus was, indeed, your friend. I knew I would not forget your smile.”

The two sat down before Kamal spoke. “Noor, my name is Kamal, and I’m a Jesus follower. I have loved Him with an undivided heart for ten years now and am honored to have been in your dream.”

“Jesus is touching the hearts of Muslims all over the world. He’s calling them to salvation—real salvation—one at a time, by visiting them in dreams and visions.” Kamal paused, thinking. “Is this your first dream about Jesus?”

Noor answered, hope in her eyes. “Yes, it’s my first. Will I have more dreams?”

Kamal measured his answer. “You might have many dreams about Jesus. It depends on what He plans for you. It could be that one dream is all you need.” Kamal wondered briefly just what his Lord had in mind for this woman. “You must have many questions.”

“About a thousand,” Noor blurted.

“Is this a safe place to talk?”

Noor understood the question behind the question. “My husband is at work, and besides, he lost interest in me long ago. I’m his third wife, and last year he took a fourth. She is very young, and her smooth skin, beautiful face, and shapely silhouette are all he can think about. I barely see him. He won’t come looking for me.” Anguish flickered across her face, but wonder quickly returned. “We are safe here. Tell me about Jesus!”

Kamal spoke slowly. “He is calling you, Noor. He doesn’t make random visits. Your dream has a purpose that will transform you on the inside.” Kamal watched Noor to make sure she understood. “Jesus wants you to be one of His followers. You’ve been privileged to have a personal visit from Jesus Christ. You are chosen, Noor. Even before you were born, Jesus planned this encounter with you.” Kamal looked away, into the mass of people surrounding them, then back at Noor. “He has not yet appeared to me like this, but I pray that He does.”

Noor felt authority she could trust in Kamal’s voice. She sighed deeply and put words to her first question: “Why would a prophet say that He died for me? I have believed in Him, and we Muslims respect Him.But He is much more than I thought He was… I have never been loved like I was when Jesus walked with me in that dream. I felt no fear.” She looked again at Kamal. “For the first time in my life, I felt no shame.” Her voice dropped to a whisper; Kamal strained to hear her. “Even though He’s a man, I wasn’t intimidated. I didn’t feel threatened. I felt… perfect peace.” Noor smiled.

Kamal feared that discussing Islam could drive Noor away, but he boldly turned the conversation in that direction. “That’s what He wants to give you, Noor. Before He went to the cross, Jesus said, ‘Peace I leave with you, My peace I give to you’ (John 14:27 NKJV). You will not—cannot—find peace like that with anyone else. No one but Jesus even has it to offer.”

Kamal continued, “Noor, you’ve spent your life searching for God through religion. I did the same thing. My religion was different than yours, but in the end, all religions amount to the same thing: frustration. They’re filled with man-made rules that will supposedly get you to God. But the fact is, they don’t.”

Kamal could see in her eyes that Noor grasped this painful truth.

“Noor, have you ever watched people after daily prayers?” Kamal asked, not waiting for an answer. “I’ve sat outside the Al-Azhar Mosque on Friday as the ‘faithful’ come out from noon prayers. They never look very happy—or fulfilled. They don’t have the kind of peace I see all over your face right now. Religion can’t give you that. Your religion can’t give you that.” He let the words sink in.

Noor bristled. She studied Kamal’s face solemnly, her teeth lightly clenched. “Are you asking me… to leave Islam?”

Kamal had stepped into the mine field. “I’m not asking you to do anything, Noor. But Jesus is asking you to follow Him.” The sincerity in his eyes validated his words. “Do you believe your dream was real?”

Noor’s shoulders dropped as calm settled over her black form. She gazed at the ground. “I know it was real. It has shaken me to my core. I must find out all about Him.”

“Then I will do my best to answer every question you have.”

Three hours later, questions and answers still flowed between Kamal and Noor. Finally, Noor threw back her head and exhaled deeply, pleased with their progress but exhausted from the influx of strange, new information.

“What do I do with all I’ve learned today? When I give my life to Jesus and I’m new on the inside, will I still be a Muslim?”

Suddenly, Noor sat up straight. The energy of resolve rose in her voice. “I’m ready now. I want to follow Jesus.”

“Are you willing to be persecuted for Jesus?” Kamal surprised himself with the question.

Kamal’s next question was even more unexpected. “Are you willing to die for Him?”

Noor seemed less shocked by the question than Kamal. “Is that what He’s calling me to do?” she asked as matter-of-factly as if she wondered whether Jesus might want her to buy grapes at the market.

Now Kamal stared through the Friday crowd, wondering again what this brave woman’s future may hold. “It could well be your fate, Noor. Jesus told His followers on the night He was arrested that there would be harsh persecutions for those who follow Him.” He returned his focus to Noor. “It’s our privilege to suffer like He did. He warned that ‘the time is coming when anyone who kills you will think they are offering a service to God’ (John 16:2).”

Noor sighed. “Jesus was talking about Islam. He had to be. That’s what happens to Muslims who convert.” Noor folded her hands and pressed them to the ground. “I should tell you something, Kamal. I saw a television program a month ago. Father Zakaria was talking about Jesus, and a few people called in to the program to debate him. He handled them with ease. I was amazed, though, because most of the people told him how Jesus had changed their lives. I could not believe my ears. These were Muslims! I remember thinking they would probably die because of leaving Islam. Their families would see to that. You know all about honor killing, I presume?”

They looked at each other for several seconds in silence.

Noor sucked in her breath, exhaled, and watched a shopper brush past. “Well, I’m not afraid. But…I have to think about this. I must go to the mosque or to some place private. I must pray. What about my children? It’s all so new. I…”

Kamal smiled the same smile Noor had seen in her dream. “I understand. Jesus has made you a wonderful offer that you only have to accept. He is calling you. I will pray. Until we meet again.”